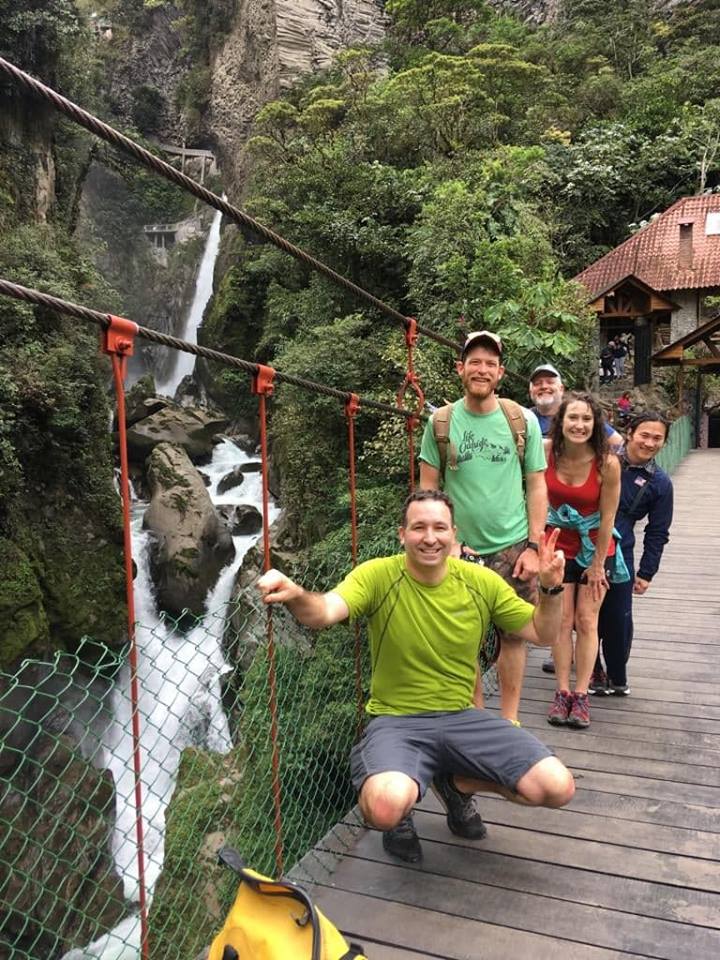 This year, eNRG took it’s core team down to South America for some adventure and team building. It was an incredible experience filled with lots of great paddling, stunning scenery, many smiles and character-building experiences typical to international travel. We’d like to share some of those moments with you….

Sam, eNRG Director/co-owner, and Sue arrived a day early in Quito, Ecuador to get the lay of the land and reconfirm with local partners for transportation and equipment.  Having everything dialed in, they headed to Quito Colonial (old town Quito) to site see. The city is vibrant and full of history, and with the aid of eNRG’s Ecuadorian driver hired for the retreat, they were able to navigate Quito from a local’s perspective. Awesome!!

The rest of the crew arrived a day later and, after packing the van with all the gear, ventured to Banos. This mountain town is lovely and, while there, the team enjoyed an exciting bike ride, a caged zip line through the canyon and hike to Pailon de Diablo before heading back to Banos proper for great food and rest for the travel toward Tena.

With so many options for paddling, the crew stayed in Tena for several days.  This gave them the opportunity to “get their feet wet” (pun INTENDED) with a SUP/kayak paddle down Napo, a class II stretch through mind-blowing ecosystems rich with wildlife. At the take out, they enjoyed their first view of monkeys. Meanwhile, the locals seemed in awe of the eNRG team’s paddleboards – snapping pictures at what was clearly an unusual sight.   Kayakers are around, but SUP apparently, is not too common. The second day was the Misahualli, a 23 kilometre section of class II/III whitewater . It was a full-day paddle so the team came prepared with plenty of hydration and energy bars. This stretch challenged some of the crew, but met the perfect edge. The swims were brief and without injury. With spirits high, rapids fun and laughs frequent, the crew thoroughly enjoyed the first full day. With each passing day, the level of difficulty went up, preparing the team for the next stop–Baeza. Not before a fond farewell to our host Santiago of “Kayak Ecuador.”

Baeza is definitely a hub for kayakers, and languages from all around the world could be heard in the restaurants and on the streets. It didn’t take the crew long to figure out why.  The runs out of Baeza were next level, very accessible and beautiful. Coincidentally, Sam ran into friends from Oregon so he, David and Jake were able to have a “guide” to show them this stretch of class 4/4+ river they hadn’t yet paddled.

After Baeza, Jake and Kurt took a bus headed back to Quito while Sam, Sue and David extended the trip with a big detour out to the Amazon Basin–Cuyabeno, an area considered the most bio-diverse spot in the entire world.  It wasn’t entirely easy to access, especially with a road blown out and closed. However, with some quick thinking–hiring a private driver to take the crew through back roads, reminiscent of an Indiana Jones movie, they were able to make it across a river-ferry to the bus and 2-hour boat ride, finally to the eco-lodge where they stayed, deep in the jungle.

Owned by Cuyabeno native “Washington” Caiman eco-lodge was authentic, customer-service driven and loyal to Washington’s goal to educate the guests while giving them the time of their lives. All meals served family-style, the eNRG team got to know their fellow-travelers fairly well while exploring the waterways and jungle. Seeing countless snakes, monkies, tropical birds, freshwater dolphins and even caimen, Sam and Sue agreed that the sounds were the highlight since the jungle was a symphony like they’d never heard before. They also agreed that paddleboards were the best way to see this area of the world. Quiet and maneuverable, the SUPs they brought served them well as they struck out, still dark, to catch the sun rise on the lake.

Now, back in the states (after Sam and David continued on to even bigger water in Columbia), the team reflect on the trip and the “takeaways” each had. While they all agree that the paddling was incredible, it seems the most poignant part of the trip for everyone was the chance to grow together as a team. Each have a passion for paddling, yet it’s truly about the people and growing the eNRG community…one that grew while in the southern Hemisphere.

Journey into the Jungle III

Journey into the Jungle I