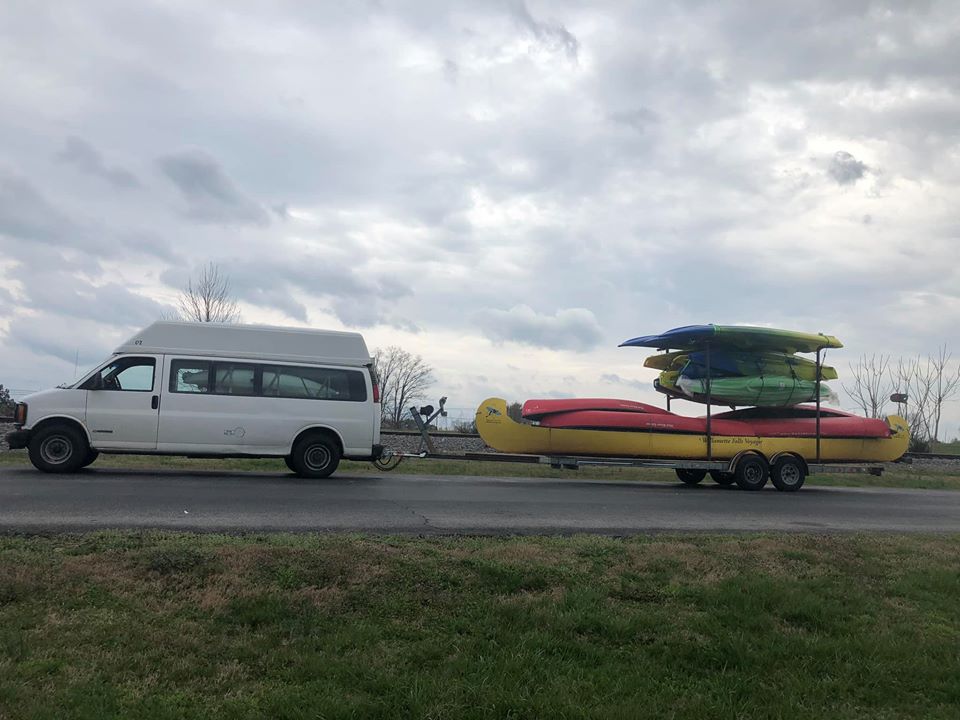 My name is Andrew Hansen, and I am a “special agent” for eNRG Kayaking.  What does that mean? Well after running class IV whitewater with Sam in a 2 person kayak and surviving, and then volunteering alongside him with Team River Runner (a kayak program for disabled vets), I have loaned my skills as an expert mechanic, fabricator, and problem solver to eNRG Kayaking quite a few times over the last few years in Oregon City.

A few months ago, director of eNRG Kayaking, Sam Drevo, spoke of a potential “special agent” trip to the east coast to pick up a new used Chevy van, and a 35-foot-long by 5-foot-wide voyager canoe as part of their 20th year anniversary celebration for school groups, Full Moon Paddles, and Music on the water events during the summer of 2020.  As my day job had slowed down in the beginning of March, I found myself on a one way flight back east to a place I’d never been at the beginning of the Corona Virus outbreak (before it was being called a pandemic). I was flying from Portland, Oregon to Dulles international airport in Northern, Virginia.

When I landed at Dulles around 11:30 pm, Tuesday March 3rd, I was picked up by one of Sam’s paddling mentors, named Bruce, who was kind enough to put me up at his house for the night.  The next day we strapped on pads and helmets at a quiet little park just outside Washington DC and Bruce pulled out his One Wheel boards from his sweet 80’s VW van.  This was my first time ever being on a One Wheel. Never in my life had I been on rollerblades or a skateboard (Paddle boarding and motorcycles are the main activities I enjoy). After about 30 minutes of some not so graceful dismounts and maneuvers, off we went into DC for a 12 or so mile ride around the city.

Washington DC was AMAZING!  From school and in many books I’ve read, I knew the area and monuments, but to see them in person and to touch them, was beyond anything I could have imagined.  Since I grew up in Oregon, I started to realize that someone who had never been to the west coast might feel the same way about our “Wild West” (with the end of the Oregon Trail and many of the historical markers so easily overlooked).  This was an experience I won’t ever forget and I hope to come back with my wife and daughter.

That evening Bruce dropped me off at an apartment that Calleva Outdoors kindly let us use while gathering the royalex canoes and voyager canoe eNRG Kayaking was purchasing. The next morning I was picked up by Matt Markoff (a childhood friend of Sam’s- & the ED of Calleva), and was given a tour of their facility which included a haunted forest, barns with horses, and a mechanics shop where I would be using some tools.

The Guys in the shop were welcoming and very helpful to eNRG Kayaking, and allowed me to get to work ASAP.  Wasting no time in addressing the needs of the van, from putting on a new door, checking and changing every fluid, new tires, and a few body panels, I was prepared for the 3,000+ miles I would be covering on the way to Oregon. When the van was ready, I took the 2.5-hour test drive to acquire a trailer I had located on craigslist and was going to custom fabricate to fit the 35’ canoe.

Once I acquired the trailer I had to add length and metal. I ordered a new 12-foot tongue, cut off 8 ft’ from the tongue welded the remainder to the rear of the frame.  I then built upper racks on the trailer to hold extra kayaks I was going to pick up in North Carolina and Tennessee on the way back to Oregon..

I picked up additional parts for the van Saturday, and Sunday I took a hike at a place called Sugarloaf mountain (strange that they call a 1,500 hill a mountain out there:).  Curiosity had the best of me as I came across a small crew of guys with metal detectors on top of the “mountain”. As Sugarloaf is the high point for a majority of Maryland, and you can see for MILES and it naturally had huge military significance back in the civil war era.   Learning this from the crew, who worked at a local museum, and that they had found bullets, buckles and other artifacts left behind from colonial times. This gave me a unique perspective about the area as I continued to hike around the 8.5 mile trail system.

We were using a wood mill at Calleva (and surrounding oak trees) to build the deck of the Voyager canoe trailer, but it broke when we fired it up so another 3-4 day break ensued.  All the while the global pandemic media storm brewed. With the trailer work on pause, I took a trip up to Delaware to lend Sam a hand on some family matters there. Sam showed me some of where he grew up, Lewes DE, the first city in the first state in the USA.  We checked out a boardwalk at Rehobeth MD, and I got put my feet in the Atlantic Ocean. We also went to check out Fort Miles at Cape Henlopen state park- just outside of Lewes, DE. That was very neat, especially as I was able to compare the differences between it and Oregon’s own Fort Stevens in Astoria Oregon.  Two forts built for the same purpose, but both very different in design. On my way back from Sam’s I took a short trip to check out Gettysburg Battlefield and museum, and much like Washington DC, there was so much to see and learn (words really can’t describe all the history there).

Once I got back to Calleva, they had their wood mill up and running.  I finished the trailer with the planks they milled, loaded up the 35-foot canoe, along with a motorcycle, two 15 foot, and two 16 foot canoes and started driving south (the long way back to Oregon).  Off to Asheville North Carolina where I picked up 3 new white water boats, then to Tennessee for 12 more kayaks. It was quite the task to get all the boats properly and safely loaded and tied down. Just after I left Tennessee a trailer bearing failed, luckily, I caught it before the tire separated from the trailer and caused significant damage. I removed both tires from that axle and limped it to a shop where they were able to locate a new bearing set, and get me back on the road.

Then, a large snowstorm was headed towards the central states and conditions that weren’t ideal for a 2wd van and a long trailer were forecasted for my route.  Choosing to stay further south on interstate 40 brought its own challenges- 30+ mph side winds hitting the diesel hightop van, plus the 12-foot-tall loaded trailer.  Basically I was driving a kite! There was about 450 miles that were borderline extreme with the wind, thankfully no Tornados which commonly occupy Oklahoma, Arkansas and Northern Texas! I most definitely had the radio on and eyes on the sky a few times driving through thunderstorms with crazy winds.  Once I hit Arizona, the weather improved and turned quite pleasant.

At this point the pandemic was in full swing, and I was worried California would close their borders. I had a minor delay just shy of Amarillo Texas.  I missed an exit while I had a ¼ tank of diesel, (oh it’s only 25 miles to town or so I told sleepy self) I’ll hit the next one in the next town. Well the next town only had gas and no diesel.  Then, I found out the hard way that the gauge in the van was not accurate and ran out of fuel.

I ended up having to get the van and trailer towed 2 miles to town… that sucked. I had to Sleep in the van that night as the station/shop I got towed to was nowhere near a hotel. It was 28 degrees and blowing at about 25 mph- brrrr. The next morning I got fuel, and the shop got the system primed. I then faithfully filled at or just below a half tank the rest of the trip.  I breathed some relief once I was passed the California border checkpoint with no issues. Crossing into Oregon and arriving home was a very welcome feeling after being gone nearly 3 weeks.

Food and supplies were certainly an issue. Several times early in the trip back (in N. Carolina/Tennessee area) I had stopped for fuel and walked up to the lobby to get a burger.  Of course, the sign read- “lobby closed drive through open”. Ok no biggie, but when I tried to walk to the drive through staff said, “we are sorry you have to be in a vehicle”… That wasn’t going to work with a 35’ canoe in tow.  After a few times of this, I relented and had to go to 3 different stores to get enough food supply that I felt I was in good shape. A road trip with only a couple packs of jerky, pop tarts, 2 cans of stew, trail mix, and some kippered snacks. I was so STOKED to pull into my driveway and be greeted by my lovely wife with a fresh cooked hot homemade lunch!!! Real food had never tasted sooo good! Sometimes it’s the simple things in life.

Slalom on the Santiam

The Restoration of Goat Island